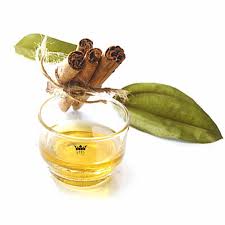 For Online Shopping   For Bulk Enquiry

The Cinnamon tree is an evergreen tree native to China, Vietnam and India. It has shiny, leathery green leaves and small, white flowers with purple berries. Cinnamon Oil is one of the most popular herbs and spices. Though cinnamon oil has numerous health benefits, it often causes irritations and allergic reactions. Therefore people prefer to use cinnamon directly instead of using the oil.

Cinnamon, which has the scientific name Cinnamonum zeylsnicum, has originated from tropical Asia, especially in India and Sri Lanka. Now the shrub is grown in almost every tropical region of the world. The herb, owing to its vast medicinal uses, had found a prominent position in traditional medicines, especially Ayurveda (the traditional Indian medicinal system).Traditionally cinnamon has been used in many cultures for treating a variety of health disorders including diarrhea, arthritis, menstrual cramps, heavy menstruation, yeast infections, colds, flu, and digestive problems due to its medicinal properties.

How Cinnamon Oil Is Produced

The bark of the cinnamon tree contains about 0.5% to 1% cinnamon oil. This oil is extracted by pounding the brown bark of the plant. The bark is softened and broken down further by sea water and immediately distilling the extract. The oil extracted in the process contains cinnamaldehyde or aldehyde of up to 60%, thus making it aromatic. It is this bark oil that is more in demand because of its effectiveness in terms of its healing abilities. Yet it is the leaves of the plant which contains more of the oil, at about 1.6% to 1.8%.When the oil is extracted from its source, it acquires a sweet scent and has a color that ranges from yellow to brown. In this form, cinnamon oil contains many chemical substances like linalool, eugenol, beta-caryophyllene, methyl chavicol and cinnamaldehyde. This mixture of substances makes cinnamon oil a potent agent that possesses many healing properties. It has acquired a good reputation as a cooking ingredient and a valuable health supplement.


How to use Cinnamon Oil